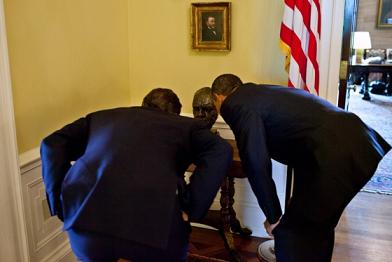 Obi Wan Kenobe Visits the White House: “This is not the Churchill bust you’re looking for.”

Krauthammer is entirely too civil here. He gives White House Communications Director Dan Pfeiffer far too much leeway — saying over and over again that it was a “mistake” and that Pfeiffer should just admit it and move on — in the lie he orchestrated about the Winston Churchill bust that was removed by Obama in the Oval Office.

Come on, a “mistake”? This was no mistake. This was an intentional lie. It’s the worse kind of lie: the lie crafted to make the other guy look like a liar.

Go check out the carefully worded post at the White House’s official website, and the tepid update that clarifies the earlier lie.

Look at the wording very carefully. It seems apparent that Pfeiffer knows that Obama’s critics are talking about a different bust of Churchill, yet he “fact checks” this by talking about the one bust that remains.

There are two busts. One of them removed from the Oval Office. The one Obama’s critics are talking about. And Pfeiffer claims that the critics are lying because there is a second bust of Churchill in a different wing of the White House that hasn’t been sent back to the Brits.

Then he posts a picture of that second bust.

But read the entire post, nowhere in it does he mention the first bust in his response. He’s intentionally banking on readers not knowing that there is a second bust.

In lawyer speak he’s not lying, he’s simply answering a question by only volunteering certain information.

Bust A was removed. See, Obama’s critics are liars because Bust B is still in the White House!

Lies work that way too. Check out the wording on the White House blog:

Now, normally we wouldn’t address a rumor that’s so patently false, but just this morning the Washington Post’s Charles Krauthammer repeated this ridiculous claim in his column. He said President Obama “started his Presidency by returning to the British Embassy the< bust of Winston Churchill that had graced the Oval Office.”

This is 100% false. The bust still in the White House. In the Residence. Outside the Treaty Room.

See how this works? He responds to Krauthammer’s criticism by giving unrelated information, but information so obscure that he believed no one would be able to call him on it. A lie of omission.

The worst part here is that after being caught in the lie, instead of apologizing for it, the White House doubles down with Dan Rather “fake but accurate” defense in an update:

The original Churchill bust remained on display in the residence. The idea put forward by Charles Krauthammer and others that President Obama returned the Churchill bust or refused to display the bust because of antipathy towards the British is completely false and an urban legend that continues to circulate to this day.

So, yes the story we circulated that the Oval Office Churchill bust was never removed was a fabrication …. but since the greater narrative — that Obama didn’t remove the bust out of malice for the Brits or for the Conservative Prime Minister — is true, then the carefully crafted intentional lie is okay?

That’s how I read it. And I don’t think I’m being unfair here.

The White House lied intentionally to make Krauthammer — and, by extension Mitt Romney — look like a liar. And their defense is that the greater narrative defines TRUTH, not the fabricated facts.

Remember: Lies in defense of TRUTH are no lies.

Cross-posted from The Jawa Report.

UPDATE: It’s telling, isn’t it? That the NY Times doesn’t seem to think fact checking the White House is worth any time or effort. Because, you know, they can be trusted.
UPDATE 7/31 PM: So, Dan Pfeiffer couldn’t take the heat any more and was forced to apologize?  AllahP reprints the entire apology here, but I’m not buying what the White House is selling.  There’s no way this smear campaign was an accident.  Nope. No way.

I’ll believe that Pfeiffer just got the two different Churchill busts confused the day I believe Harry Reid really knows something about Mitt’s taxes.  In fact, I’ll double down and say that Reid’s “friend” who invested in Bain is in the White House.  I wonder if Pfeiffer has a buck or two with Bain?